← more from
Activia Benz
Get fresh music recommendations delivered to your inbox every Friday. 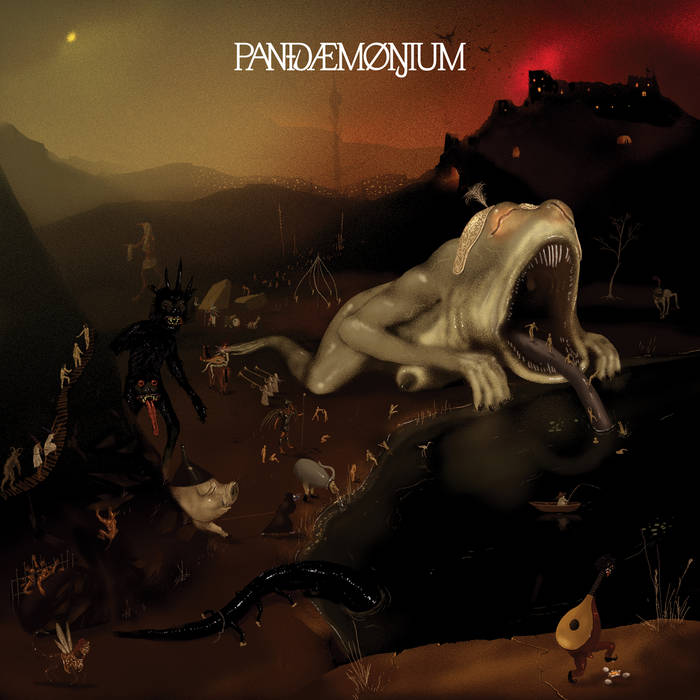 Luk LeChuck I expected a darkwave airhorn EP but this is even better! Favorite track: Winter.

Following on from his sort of nihilistic but also maybe kind of apocalyptic Inherit The Earth LP (April 2017), Slugabed’s Pandæmonium EP appears to be the result of him tumbling deeper into his own insides and finding some pretty hellish things. It has a nice front cover, painted by Parker S Jackson. Look him up on the internet!

Pandæmonium is the Capital City of Hell, according to John Milton’s Epic Poem, Paradise Lost. It is all full of beasts and demons and stuff. It’s AWFUL! But it’s also very well designed (by an architect from Heaven, no less!) and fairly well-run. There’s a nice John Martin painting of Satan, like, presiding at, um, the infernal council. It’s based on Paradise Lost. This EP is about fallen Angels and stuff. Big, grand horridness. The devil in us all, or something. There’s a track called Boney Horse.

There’s some jazzy bits, sure. There’s some noisy bits, yeah. Overall, a slightly unsettling atmosphere, okay! But it’s also quite a beautiful lil record, and I’m hoping Slugabed has worked through some stuff and feels a bit better.

The EP drops October 12th, on Slugabed’s own Activia Benz imprint, preceding his (mildly less spooky) third LP which is scheduled for um, like, February 2019, I think.

Bandcamp Daily  your guide to the world of Bandcamp

Little Brother joins the show to discuss their beautiful journey, plus tunes from Fat Tony